LS-1 Landspeeed is powered by the mighty Valjoux 7750 Swiss automatic movement giving it an impeccable time and chronograph function. Presented in a “Bulls Head” configuration, LS-1 has a stopwatch feel harking back to the dashboard mounted timing watches seen on speed record and racing cars of the era.

The main body is machined from billet 316L stainless steel and finished in matt black PVD with straight barrel knurl and brushed top chamfer. The backplate and lugs are billet machined from a single piece of 316L stainless steel which is then mirror polished to create a beautifully sculpted cradle for the body to nest into. Time  adjustment is by an oversize diamond knurled and dome topped crown and the chrono function pushers are sculpted into the cradle to accentuate the flowing three-dimensional form of LS-1.

The dial has a contemporary feel with balanced vintage design.  A satin steel index ring frames the ink black dial, which features white numerals in SuperLuminova X1 pigment along with the matt steel hour and minute hand.

LS-1 is fitted with a Zero West leather strap which is hand crafted in our workshop. The result is a rugged, vintage feeling strap that will develop a lovely patina over time. 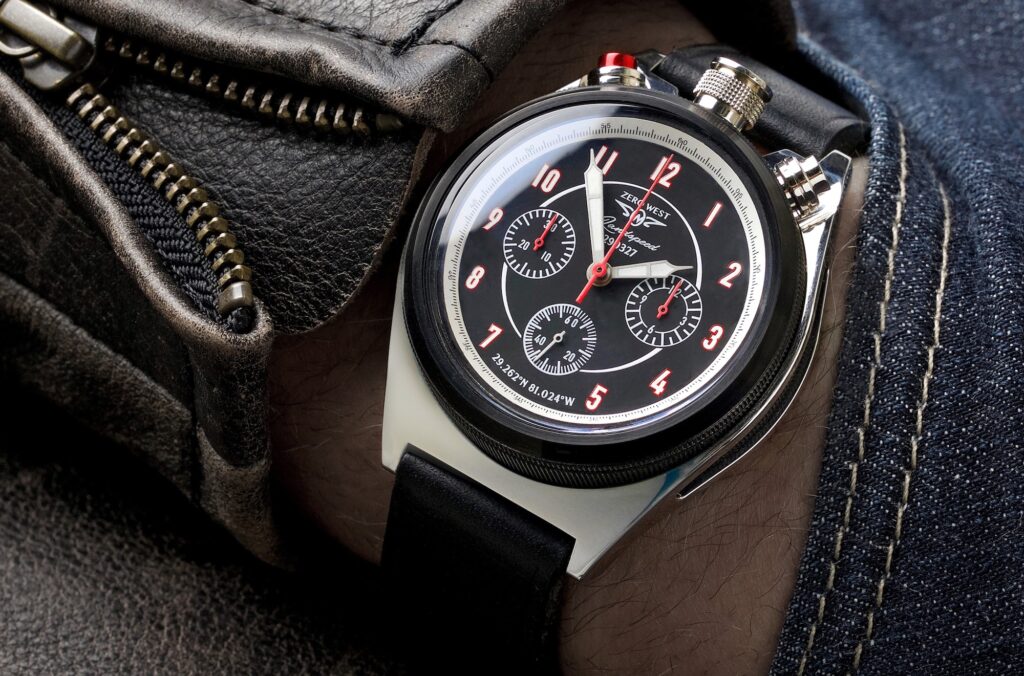 THE RECORD
THE CAR

Ever since the first motorcar took to the road, man has wanted to make it go faster. It’s a human trait, a lust for adrenaline, a thirst for competition. This compulsion to race cars has taken many forms but the ultimate goal is to be the fastest person on Earth, whether that was is in the air, on water or land.

It was an incredible car built by the British Sunbeam Motorcar Company of Wolverhampton. A colossus at 24ft long, 8ft wide and weighing in at 4 tons it was clad in aluminium alloy and painted in a bright red livery. Two 22.4 litre V12 Sunbeam Matabele aero engines, synchronised and mounted in tandem powered the car, one in front and one behind the driver cockpit. Transmission was via a 3 speed gearbox, its final stage being twin chain direct drive to the rear wheels.

The record would not stand for long and was broken in February of the following year by another Englishman, Sir Malcolm Campbell, at a speed of 206.956 mph.

Seagrave however went on to retain the record again in 1929 in a car called Golden Arrow at a speed of 231.446 mph, and once again Britain’s dominance in leading the world in engineering and setting new land speed records was upheld.