Powered by the stellar ETA 2824-2 automatic movement, L1 keeps impeccable time, just like its ground-breaking father, the H4 Marine Chronometer which was designed and made by the Englishman John Harrison in the 18thcentury. L1’s dial was inspired by H4 with its plain white finish, simple black roman numerals and blue hands. A timeless classic which exudes pure clarity.

To compliment this timeless classic watch, it is fitted with an ink blue Zero West leather strap which is hand crafted in our workshop. We chose Horween Chromexcel leather for its beautifully supple and highly water resistant qualities which results in a vintage feeling strap that will develop a lovely patina over time. (For sizing see strap + tab at the bottom of this page)

“At the core of our brand is a defining line. the main line of longitude;
The prime meridian. It’s the line where east meets west; where time starts; it’s called Zero West” 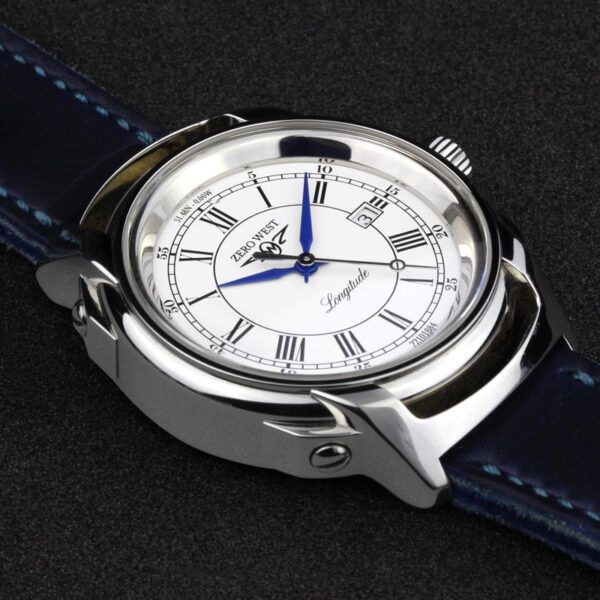 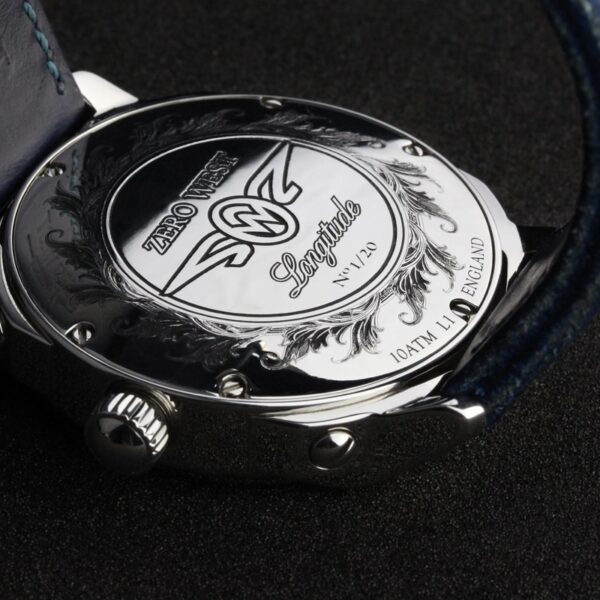 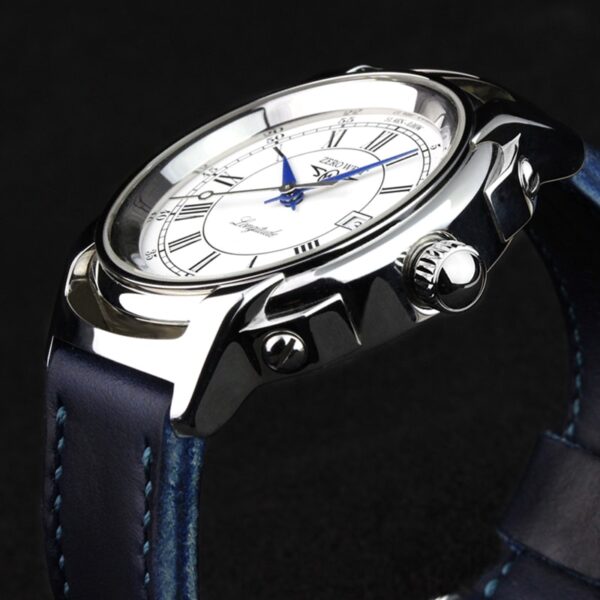 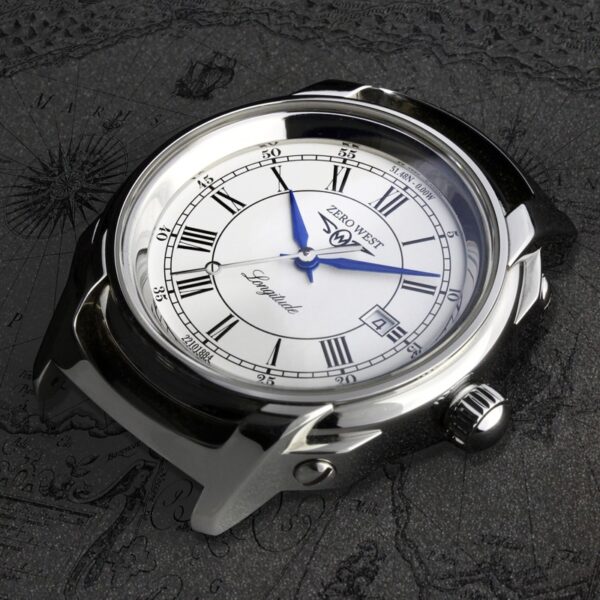 For the L1 we have chosen an ink blue Horween Chromexcel with cyan waxed stitching. This strap compliments the blue enamael hands and denotes it’s famous sea going heritage. All our custom straps are edge burnished and formed, traditional saddle stitched and crafted from a single piece of leather, thinned and folded at the lug end. Each one is fitted with a single sliding keeper loop and quality ARD laser engraved buckle

When you purchase one of our timepieces you do so knowing every detail has been engineered. Ours straps look and and feel beautiful, they really set the watch apart from other brands.

Of course if you would like a different strap for your L1 from our straps page please add a note in the checkout window.

We craft our straps in 2 lengths

Before the 18th century, navigation at sea was a hazardous business and countless ships and their crew perished because they became lost. In essence, to pinpoint your position on Earth you need two coordinates: latitude & longitude. Latitude, or the north/south coordinate, at that time could be precisely fixed by observing the stars. To position yourself east/west on the globe you need to know your longitude but this coordinate cannot be calculated from the stars. It can however be established by measuring the accurate period of time from a known fixed reference point, but before the 18th century no timepiece existed that was accurate enough to navigate by.

In 1714 the British government set up the Longitude Act to reward anyone who could practically solve the accurate positioning of longitude, and a pioneering British horologist called John Harrison developed designs throughout the 1700’s to refine and innovate accurate clock and watch mechanisms. This culminated in his H4 marine chronometer design that had a highly complex movement, at the heart of which was a vertical escapement. This British designed marine chronometer set the benchmark which finally enabled the accurate positioning of longitude.

By the 19th century, marine chronometers were the most accurate way of calculating longitude and in 1884, 22 countries decided by committee to standardise and fix the location of the prime meridian. This line of zero longitude was designated to pass through the Royal Observatory at Greenwich in London and so the navigational reference of time was born, but it was the tenacity and pioneering designs of the great John Harrison that enabled this momentous feat

To celebrate this great British designer, his legacy, and the birth of our own brand Zero West,
we have designed a very limited edition Longitude watch the L1 (limited to 20 pieces)