A golden age for British motorsport

The TT58 not only embodies a Time and Place, but a proud celebration of British motor racing. Britain has a rich unrivalled motorsport pedigree which is just as vibrant and successful today as it was when we pioneered it. The sport courses through our veins and our senses are overwhelmed by the thrill and danger of life on the edge: man vs machine. This classic Zero West timepiece has strong minimalist lines, an instrument inspired motorsport dial, smooth case and mirror-polished DSL lugs. TT-58 is British designed and engineered and born out of our great British motorsport heritage.

The watch is powered by the stellar Swiss ETA 2824 automatic movement thus ensuring it never misses a beat and is fitted with a ZW handmade strap in British racing green with vintage contrasting stitching and an engraved polished buckle. (Alternative colour straps available)

THE BEST OF TIMES FOR BRITISH MOTORSPORT

THE RACE
THE DRIVERS
THE CAR 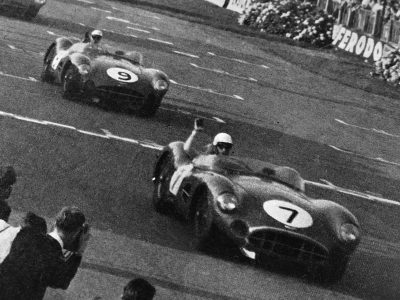 The sixth and final round of prestigious Royal Automobile Club Tourist Trophy held in West Sussex was the pinnacle of endurance motor racing and drew entrants from around the world. At 14:00 the Union Jack fell to signal the start of the 4-hour endurance race and the eager drivers dashed Le Mans style to their cars. The Astons were dominant from the start and soon established an unassailable lead up against Porsche, Jaguar D-Type, Lotus and A.C-Bristol to name a few. The race was frantic and saw some accidents and mechanical failures. Multiple pit stops ensued but the David Brown Aston Martins finished 1-2-3, separated by only a few seconds and having covered 148 laps at an average speed of 88.324mph, a full four laps ahead of the fourth placed Porsche.

The winning drivers on that day were Stirling Moss and Tony Brooks. Brooks was born in 1932 and known as the “racing dentist” because as well as racing cars he trained at his father’s dental practice. He competitively raced both sports and F1 cars between 1956 and 1961 driving for Vanwall, BRM, Ferrari and Aston Martin amongst others. Moss was born in 1927 and described by many as “the greatest driver never to win the World Championship”. He drove competitively for ten years between 1951 and 1961 in both sports and F1 cars racing for Mercedes, Maserati, Vanwall, Aston Martin and Lotus to name a few. He notably won the 1955 Italian Mille Miglia 1000-mile road race in a magnesium alloy bodied Mercedes-Benz 300 SLR. That drive was described as the “most iconic single day’s drive in motor racing history”.

The winning Aston in the 1958 TT driven by Moss/Brooks was chassis #2 which was originally designed in 1956 by Ted Cutting and his team. It featured a multi-tubular space frame chassis, advanced front and rear suspension and a lightweight 20-gauge aluminium and magnesium alloy body shell. The shape was sleek and had distinctive vents on the side, a design feature that would become standard on many future Astons. The car was designed primarily for sports and endurance racing and though between 1956 and 1959 had many different engine configurations, the DBR1 would go on to became one of the most icon sports car of all time.